If you have taken a look at the popularity rankings on Distrowatch, you’ll see that the top 10 have really mixed themselves around a bit in the last couple of months. If you select past 3 months or more recent in their rankings list, you’ll find that PCLinuxOS 2007 has surpassed Ubuntu and is in the number one spot. So long story short – download and install!

It looks good, especially since I’ve enabled Beryl on the system (a clone system with 2.66GHz Celeron and 1 GB of RAM). I won’t go into further detail on its looks, since plenty of others have already done so. I will bring up a couple of things though I think folks should take note of.

When I did my first go around with installing, I had booted the live CD to obtain an IP address from DHCP. After install, as expected, it was configured to obtain an IP by DHCP. By the way, the install – other than having to reboot once to the live CD again to finalize the partitions, was a very simple (almost to a fault) “next, next, done” exercise. This particular box I like to have configured for a static IP, so I went into the Control Center and did so… and I lost name resolution. So I reconfigured to use DHCP and tested with nslookup. This is where I discovered that nslookup is not installed by default. Odd, but a little quick research revealed to install bind-utils to get your nslookup. Simply use Synaptic, or from a terminal as root, execute apt-get install bind-utils. I don’t know why they would not have it installed by default, but there it is – a quick fix.

I then remembered that the install did not ask about the network config, something I usually have to do when installing Linux. However, it did ask me when the live CD booted up. So I rebooted again to the live CD, and configured my settings as I wanted for a static IP, DNS servers, etc. Lo and behold, when this install completed, the system was configured for the static IP, etc. I had configured for the live CD. Pretty slick, despite that it does take a bit getting used to. Usually one thinks of the live CD environment isolated from what the installed environment will be.

So to sum up, I am pretty impressed with this distribution. I tweaked the desktop some from the default (see screenshots below). This post is actually being written from this box using OpenOffice.org Writer 2.2. Most folks would be installing this distro as a desktop system obtaining its IP from DHCP, so there would be no need to go through the reboot of the live CD like I did. This distro’s goal is to be a Windows replacement, so the average user would also not likely notice the absence of the nslookup, but I still feel it should be there by default, as it is in Windows, Mac OS, and other Linux distros – just in case you get that call from your friend or relative saying they can’t get to the internet. 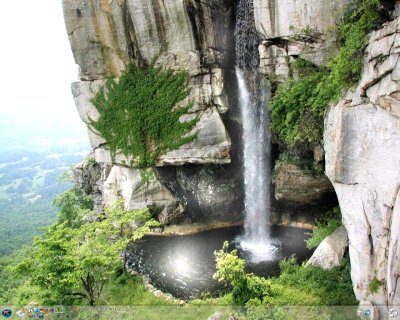 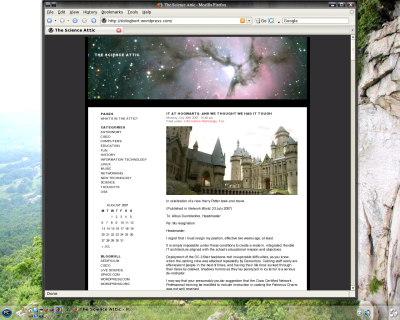 Husband and Dad. IT professional tech guy and woodworker. Will bring some sort of camera with me outdoors.

Feel free to post your config. Perhaps someone out there has a similar setup and can offer some advice.